Top 5 Jobs for the Visually Impaired

Top 5 Jobs for the Visually Impaired

In this fast-paced world where we come across new challenges every day, the biggest one to exist till this day is ‘survival’. Survival does not only imply to make it alive in a certain situation or to live longer than the other person. Survival also refers to the propensity of a person to overcome the odds and achieve the goals that they have been dreaming about their whole lives.

In present times, it has become a challenge on its own to make both ends meet. As stated by the Economics Policy Institute, Slow economic growth and rampant increase in population cause the graphs of unemployment to escalate rapidly.

According to the Congregational Research Survey report (CRS), the US in April 2020 has witnessed the highest unemployment rate observed since 1948, i.e. 14.8%. This situation is even more worrisome when we talk about the unemployed legally blind community.

It is high time to address the issue of people with visual impairment without decent and stable jobs, or else the situation will worsen over time as approximately 6.8% of children 18 years and younger have a diagnosed serious eye condition in the US according to CDC.

What Jobs Can a Visually Impaired Person Perform?

If you have an eye condition or visual impairment, this is not the first time that your brain is processing these words. You must have given it a thought for as many times as you remember or been asking others so that you kickstart a financially stable life while living with a disability.

The problem here is not only a lack of stable jobs but also a lack of counselling and awareness. As reported by the National Federation for the Blind, around 70 percent of people with visual impairment or legal blindness are surviving below the poverty line.

On the brighter side, progress in technological advances have significantly transformed our lives and opened new doors for people with special needs. The invention of assistive low vision aids have enabled equal access and opportunities to everyone.

Surprisingly, there is a diverse range of career options for people with visual impairment to choose from. Find a few of them down below.

You do not necessarily need a healthy pair of eyes to cherish the beats of musical instruments. Being blind cannot hinder one’s way of becoming an incredible musician as music is connected to the heart, mind, and soul of the person and blind people are more sensitive to the sounds than a normal person.

If a person masters the art of understanding and creating good music, nothing in the world is beyond the bounds of possibility. To do so, blind music students can use white literary braille invented by Louis Braille, a blind piano teacher. General braille and music braille are almost the same but the braille music has its own syntactic meaning and abbreviations.

To prove the fact, we can look around and find numerous examples of people with legal blindness and vision impairment who are also thriving in their music careers.

Rod Clemmons is one of those rock stars who defied all the odds to become a thriving singer, songwriter, and producer, despite being born blind.

Mastering the art of cooking is not everyone’s piece of cake. But as unbelievable as it may sound, a blind person can also be an amazing chef! Adding a dash of this and a pinch of that until the dish tastes perfect is what cooking is all about.

Just like in every other walk of life, technology has got you covered here too! If you are a blind but passionate chef, there are various amazing kitchen tools that you must have in your kitchen. These tools include:

One necessity or condition other than these kitchen gadgets required for the blind chefs to navigate and cook easily in the kitchen is organization. As long as the workstation is clean and organized, and the person knows what is placed where, one does not feel the need to see where each ingredient is placed to create a scrumptious concoction.

The American chef Christine Ha with a rare autoimmune disease (Neuromyelitis Optica) manifested how one’s eye condition cannot become a hurdle in pursuit of the goal if the person is dedicated to achieving it, by winning the title of  Masterchef America.

It is relieving to know that a blind person can also make a good fortune by becoming a motivational speaker, which is one of the most rewarding career options. What can move the hearts of the audience more than a story that comes from a person who has broken the odds and overcome the fears to educate and encourage others?

A person does not have to have a clear vision to educate people regarding subjects that really matter. It is the magic of his sagacity and wise words that do all the work!

Miles Hilton-Barber, the most widely sought-after motivational speaker, lost his sight in his early twenties. He did not let blindness obtrude his dream of changing lives through his words. Rather, he strived in his career and delivered his services in more than 69 countries across the globe, speaking at more than 1000 corporate events.

Becoming a graphic designer while being blind may sound like the craziest thought to have crossed your mind. But looking at people thriving as professional graphic designers despite their blindness will surely make you believe that anything is possible if you have the will.

Various tech gadgets like tactile drawing tools help the artists with low vision to continue with their passion of being a designer or an animator. The tactile drawing tools either produce a positive or a reversed image like an image drawn on a paper. The InTact SketchPad, Sensational Blackboard, and Raised Line Drawing Board add convenience to the job of a visually impaired designer.

A color blind designer Pablo Stanley also shares his favorite tools that assist him in his everyday life. Khroma, Gradients, Happy Hues, Stark and many others are the tools that help him get through his day full of artistic masterpieces he has to create.

As soon as the vision deteriorates, people give up on their career that involves the use of their eyes more than any other organ. Keith Rosson, on the other hand, held on to his goals tight and earned clients lined up to get their hands on the artistic masterpieces he created.

If Keith, with optic nerve hypoplasia, can make it, you can also. Just an artistic mind, devotion, and magic in the fingers are all it would take to make a person a thriving artist.

One of the easiest ways one can think of for the blind people to make a living is by becoming a radio presenter. Especially if the people with visual impairment do not want the world to know about their disability, being on the radio is the smartest way to connect with people without them knowing about their special needs.

One can become a radio jockey or a radio broadcast journalist depending upon the area of interests and the skill required. Peter White, a British broadcast journalist born with blindness, has been broadcasting for BBC since 1971. He currently presents programs  for blind and partially sighted communities. 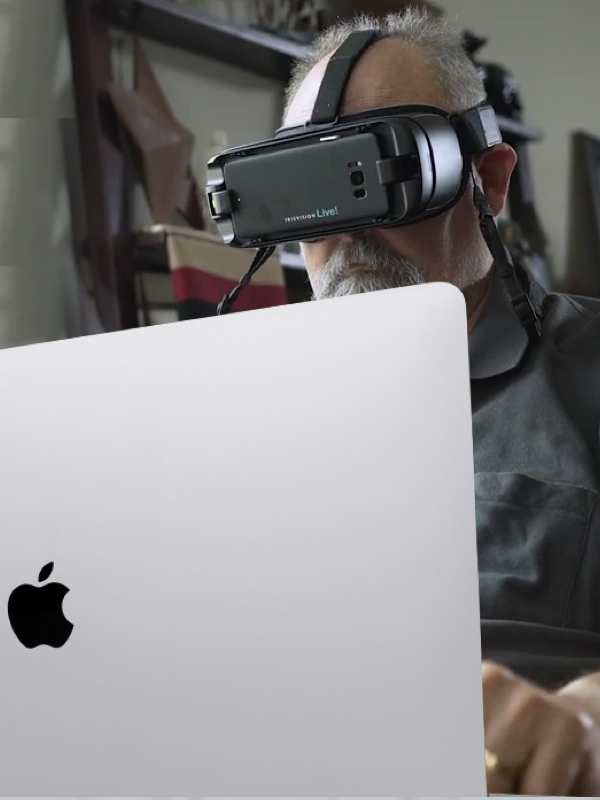 The present time is the era of inclusivity and the invention of assistive low vision devices and technological advances have added to the ease for the visually impaired and legally blind people to pursue their goals and excel in professional lives with equal opportunities. One such breakthrough low vision device is the IrisVision that leverages functional areas of the patient’s eyes to restore vision instantly, with features powerful connectivity tools and packages it all in an award-winning, voice-controlled device that makes it easy for anyone to use.