Glaucoma – A Glance at a Potentially Sight Threatening Eye Disease

Glaucoma – A Glance at a Potentially Sight Threatening Eye Disease

You can never be too careful when it comes to taking care of your eyes. Get updates on preventive measures and more.

Most of you might already be aware of the function and significance of optic nerve. It serves as the expressway connecting your eyes to your brain and glaucoma is an eye condition, which damages this optic nerve.

One of the major reasons behind glaucoma is the fluid retention in front part of the eye, as a result of which the pressure inside the eye (intraocular pressure) also increases, thus damaging the optic nerve over time.

As of now, no viable glaucoma cure is available, but catching it early can help you prevent vision loss due to it. That is why experts recommend regular eye exam.

Glaucoma is capable of affecting all age groups, but most commonly, it’s the adults in their 70s and 80s most vulnerable to it. According to Prevent Blindness America, the glaucoma prevalence rate is 1.9% for adults aged over 40 in the U.S. 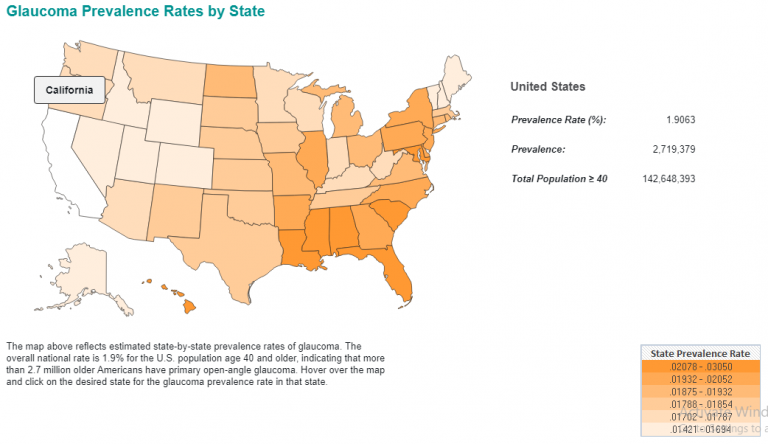 Often referred as the “silent thief of eyesight”, this eye condition remains symptomless to the most part until it’s already too late. It undergoes a slow development spanned over many years and affects your side vision or peripheral vision first.

That’s why so many people remain unaware that they have glaucoma, and most of the time it’s picked up only during a routine eye exam. It usually affects both eyes at the same time, though inflicting one of them worse than the other.

Many people complain of blurred vision or appearance of rainbow colored circles around bright lights as the most common symptoms of this sight threatening eye condition. Some other glaucoma signs and symptoms include:

There are various types of glaucoma:

The most common type of the disease, open angle glaucoma is caused by the partial blockage of the trabecular meshwork, with the drainage angle formed by the cornea and iris remaining open. This results in a gradual increase in the eye pressure, which is basically what damages the optic nerve in case of this variation of the disease also known as “wide angle glaucoma”. Its progression is so slow that many people end up losing vision before even getting aware about the issue at all.

Also known as the “narrow angle glaucoma”, this type of glaucoma affects the eye due to the iris bulging forward to either totally block or narrow down the angle formed by the cornea and the iris. This disrupts the circulation of the eye fluid, due to which eye pressure increases eventually. Moreover, some people already have narrowed drainage angles, putting them on a higher risk for angle closure glaucoma.

This is the variation when your eye pressure remains within normal range, but your optic nerve is still damaged. Unfortunately, the exact reason for this remains unknown. Some believe this can be because of the high sensitivity of the optic nerve. Another theory relates it to low supply of blood to the optic nerve due to several reasons, such as accumulation of fatty deposits (plaque) within the arteries — “atherosclerosis” — or some other conditions capable of impairing blood circulation.

Unlike what many people believe, glaucoma can also affect infants and children. Some of them might have it by birth, while it can also be developed within the first few years of their life. Anything ranging from drainage blockages to an underlying medical condition, can damage the optic nerve in case of glaucoma in children.

This is the type of glaucoma in which drainage channels of your eye are restricted or clogged due to pigment granules from your iris building up in them. Pigment granules can sometimes be stirred up by activities like jogging and end up being deposited on the trabecular meshwork, raising the eye pressure significantly and damaging the optic nerve.

Glaucoma causes vary and comprise of a number of factors. Buildup of eye pressure remains the prime cause for all types of glaucoma cases, which occurs when excess fluid cannot be drained out properly.

The precise reason behind this raised pressure is not known in many cases, though certain elements can increase the risk, such as:

Age: The older you get, the higher your probability of getting affected by glaucoma gets.

Ethnicity: Your ethnicity also makes you more or less vulnerable to this eye disease; for example, people of Asian, African and Caribbean descents are at a higher risk for glaucoma.

Family History: Then comes family history – your likelihood of getting affected by this disease increases if you have a parent or sibling with it.

Other Medical Conditions: For example, diabetes, shortsightedness and long-sightedness also act as the influencing factors for glaucoma.

Glaucoma diagnosis requires your doctor reviewing your medical history and running you through a comprehensive eye exam, which can involve several tests, such as:

Reversing any vision loss caused due to glaucoma before its diagnosis is not possible as yet, but an early diagnosis followed by effective treatment can definitely help stop further vision deterioration.

Glaucoma treatment depends very much on the type of the disease you have, but some viable options include:

Prescription eyedrops serve as one of the most basic treatments for glaucoma. They are helpful with decreasing eye pressure in two different ways, i.e. by improving fluid drainage of the eye or by decreasing the amount of fluid produced by your eye.

If eyedrops alone don’t suffice for lowering down your eye pressure to the desired level, eye doctors prefer prescribing an oral medication, a carbonic anhydrase inhibitor most of the times. However, these are also known for some unwanted side effects.

Surgery and Other Therapies

Your eye doctor can also prescribe various surgical procedures for treating glaucoma including laser therapy for glaucoma. Some of them include:

Glaucoma inflicts upon your vision gradually and in a symptomless manner, most people remaining unaware of it before it’s already too late and some vision is lost. That’s why many people are also recommended for low vision aids like IrisVision.