Stargardt Disease – A Degenerative Eye Disease to be Wary Of

Stargardt Disease – A Degenerative Eye Disease to be Wary Of

You can never be too careful when it comes to taking care of your eyes. Get updates on preventive measures and more.

What is Stargardt Disease?

Stargardt disease is a type of macular degeneration that affects infants and children – a rare inherited degenerative disorder of retina (the lining comprised of the light sensitive tissues at the back of the eye).

Vision loss due to this disease typically takes place through the childhood or adolescence, though it might remain unnoticeable until later in the adulthood in many cases.

The victims of Stargardt disease rarely go completely blind. In fact, they undergo a gradual vision loss, which worsens to 20/200 or more over time (as compared to normal vision of 20/20).

As to why this inherited eye disease is named so, it is named after the German ophthalmologist who reported its very first case in 1901.

Macula, the small central most region of the retina responsible for a sharp straight-ahead vision, becomes the prime target zone of this disease. According to some estimates, Stargardt’s disease affects 1 in every 8,000 – 10,000 people.

One of the most common symptoms of Stargardt’s disease is a gradual loss of central vision in both eyes of the patient, but there are a host of other symptoms indicating the presence of this disease.

Another commonly noticed symptom includes the appearance of black, gray or hazy spots right in the center of the vision. Some people suffering from macular dystrophy also report difficulty adjusting in moving from a well-lit to place to a dark one. Sometimes, color blindness can also be caused by this disease.

This factsheet by GARD (Genetic and Rare Diseases Information Center) best describes the symptoms of Stargardt’s disease in detail. 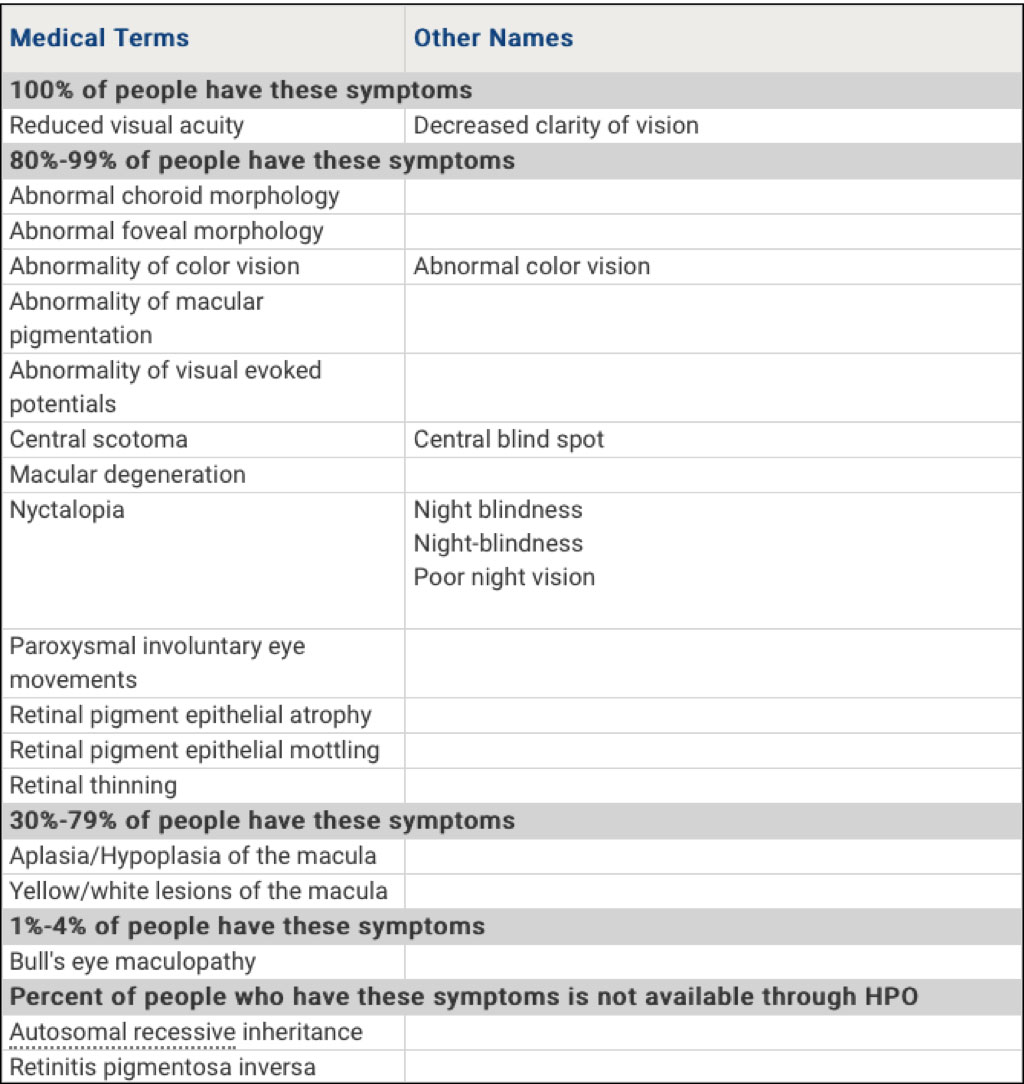 (Most common symptoms of stargardt’s disease)

Every single person suffering from this disease experiences a different rate of progression of vision loss. A rapid vision loss is observed in people with earlier onset of the disease. Majority of people with this disease eventually end up having 20/200 or worse vision, some of them also losing their side vision or peripheral vision as they age.

The retina is richly populated with ‘photoreceptors’, the light-sensing cells. There are two types of these cells, rods and cones, which collectively serve to detect light rays and convert them into electrical impulses. These electrical signals are passed on to the brain through the optic nerve, where it interprets them into the images as seen by us.

Rods, located around the outer edges of the retina, help you see things when the lighting conditions are dim and dark. Cones, found in the central region of the retina – the macula – are meant to help us see colors and fine details in an image.

Though both rods and cones are damaged in Stargardt disease, cones tend to be affected more of the two, and no one is yet sure why this happens.

As of what causes Stargardt disease:

It turns out that one of the most common causes of this eye disease is the mutations that take place in a gene labeled as ‘ABCA4’. These mutations result in production of a special type of protein, which disrupts the normal flow of food and waste material in and out of the retina’s photoreceptor cells.

‘Lipofuscin’ (a fatty substance forming yellowish flecks) is the byproduct created within the photoreceptor cells of the retina. The clumps of lipofuscin start accumulating in and around the macula due to the mutations in ABCA4, impairing the central vision. This eventually leads to the death of the photoreceptor cells, inflicting permanent damage to your vision.

An eye doctor would need to examine your retina to diagnose Stargardt eye disease. A positive diagnosis for this disease means seeing the deposits of lipofuscin as yellowish flecks within the macula. These flecks vary in features like size, color, number and appearance, but they are usually observed in a ring-like pattern extended outward from the macula.

You may have to undergo a few eye tests in addition to the standard eye chart for assessment of low vision symptoms. These may include:

Visual Field Testing: This is a test designed for measuring two aspects of your field of vision, i.e. distribution and sensitivity. A handful of methods exist for visual field testing, none of which is painful. Most of them require you to indicate your ability in seeing a target/stimulus. Through this test, an optometrist is able to map out your visual field, which enables them to identify whether your central vision has suffered more or the peripheral vision.

Electroretinography (ERG): Ophthalmologists resort to ERG for measuring the electrical responses of rods and cones inside the retina to light. It requires placing an electrode on the cornea, while light is flashed into the eye. The responses generated by the eye are viewed on a monitored and recorded. Any abnormalities in the patterns of light reflect the presence of Stargardt’s disease or any other eye diseases that can cause retinal degeneration.

Fundus Photography: Simply put, it involves photographing the back of the eye, i.e. ‘fundus’. Eye doctors use these photos to identify the presence of lipofuscin deposits, which are detected using a special filter named fundus autofluorescence (FAF). Lipofuscin is known to glow in the dark (naturally fluorescent) in response to a light of specific wavelength.

Optical Coherence Tomography (OCT):  OCT is a scanning device bearing resemblance to ultrasound in functionality, using light waves instead of sound waves to capture images. It requires the patient to place their head on a chinrest, while their retina is exposed to invisible, near-infrared light. It becomes easier to picture the retina deeply, because the eye is designed to let the light rays penetrate through it. Experts then analyze these pictures for retinal degeneration by identifying any abnormalities in thickness of the layers of retina. Sometimes, ISLO (infrared scanning laser ophthalmoscope) is combined with OCT to get additional images of retinal surface.

Color Testing: Color vision can also be affected later in Stargardt disease, and a host of test can be used to measure it. For additional information, experts often resort to three other tests, i.e. fundus photography in combination with electroretinography, autofluorescence and optical coherence coherence tomography (OCT).

Some optometrists recommend using dark glasses for protecting eyes from bright light exposure when out in the open, so that the buildup of lipofuscin can be discouraged. Others recommend some high-tech alternatives like Stargardt disease glasses, which not only offer protection against light exposure, but also expedite your visual experience significantly.

Cigarette smoking as well as second hand smoke exposure should also be avoided. Some studies suggest potential vision loss might also be accelerated due to high-dose of vitamin A, as it encourages lipofuscin accumulation.

So, you better avoid consuming supplements loaded with more than recommended daily quantity of vitamin A, or do so under a doctor’s supervision if needed desperately.

Your eye doctor can also recommend you to consult various services and specially designed low vision aids like IrisVision to carry out your daily activities independently and conveniently enough.

In fact, you can have a look at some inspiring stories of people suffering from low vision problems here, whose lives have been transformed by using an effective low vision aid like IrisVision.