Having one of your senses deteriorate is a frightening thought to ever cross your mind. Out of all the fundamental senses, one organ without which we cannot move around independently is the eye. Irreversible damage to the vision is an unfortunate reality for a considerably large number of US citizens.

The graphs of visual impairment and blindness among children in the world and especially in the United States have skyrocketed at an alarming rate in the past few years. According to the Centers for Disease Control and Prevention (CDC), vision loss is one of the most prevalent disabilities among children.

In 2015, the number of children affected by severe vision conditions aging 3 to 5 was more than 174,000 in the US as reported by the National Institutes of Health. 69% of these cases occurred due to untreated refractive errors while amblyopia was the cause of the rest of the 25% cases. The projected prevalence of the visual impairment cases of children aged 3 to 5 through the year 2060 is expected to surge by 26%. It is important to look into the causes and impacts of vision conditions to ward off a high proportion of preventable vision impairment in preschool children.

What Causes Vision Loss in Children?

A depletion in a person’s ability to see clearly that may or may not cause the person to go completely blind is generally termed vision loss. Vision loss can be sudden or may happen over time and occurs due to general reasons such as trauma, head or eye injury, retinal detachment, or health conditions such as eye disorders.

Some hereditary or congenital disorders such as congenital glaucoma, retinal degeneration, congenital cataracts, retinopathy of prematurity (ROP), optic nerve hypoplasia (ONH), optic atrophy, and many other eye conditions may also result in partial or complete blindness.

An injury to the head or an eye trauma such as corneal abrasion, subconjunctival hemorrhages, traumatic iritis can also cause complete or partial vision loss. Damage to a part of the eye, especially the optic nerve can lead to vision loss.

The non-refractive errors include severe eye conditions such as cataracts, glaucoma, retinoblastoma, infantile trachoma, macular degeneration, and so forth.

What is Juvenile Macular Degeneration?

A group of rare and genetically transferred eye disorders that targets young adults and children is known as Juvenile Macular Degeneration (JMD), which generally causes deterioration of central vision. Vision loss due to juvenile macular degeneration often starts in early childhood. The diseases included in this group are Stargardt’s disease, Best’s disease, and juvenile retinoschisis.

The macula which is responsible for projecting a clear image, recognizing faces, and seeing colors is a tissue present at the back of the human eye and center of the retina. This group of eye diseases damages the macula which causes deteriorated central vision. Juvenile macular degeneration is handed down genetically and there is no medical procedure to treat these acute conditions.

The signs and symptoms that mark the presence of Stargardt’s disease include the appearance of yellowish-white spots inside and around the central region of the retina i.e. the macula. This unusual occurrence of the yellow-white spots is the abnormal accumulation of the fatty substance built up during the regular cell activity.

Stargardt’s disease is most commonly characterized by black or grey spots in the center of the visual image. Vision loss does not occur spontaneously but happens gradually before affecting both the eyes.

The disease picks up pace once the visual acuity of the eye drops by 20/40 and does not stop receding until it reaches 20/200. At this point, vision loss is so severe that the person is considered legally blind. Stargardt’s disease damages the central vision but does not affect the peripheral vision. The later stage of the disease is more severe as it makes the person devoid of a colored vision.

Stargardt’s disease is known to be transmitted through the gene ‘ABCA4”. Mutations that occur in this gene produce a specific protein. This protein is responsible for disrupting the regular flow of food and waste inside and out of the retina. This leads to the production and accumulation of ‘Lipofuscin’, a yellowish fatty deposit.

Can Stargardt’s Disease be Treated?

Unfortunately, Stargardt’s disease cannot be treated at the moment. There are a few preventive measures you can take to prevent the disease. To minimize the build-up of lipofuscin, the ophthalmologists recommend the people with Stargardt’s disease avoid direct sunlight or bright light by wearing hats and dark-tinted sunglasses.

Active as well as passive smoking is also discouraged as it can accelerate the deterioration of the macula by either reducing the number of protective nutrients that travel to the eye through the bloodstream or by increasing the number of chemical compounds that carry a damaging effect.

An alternative to ordinary glasses which is a high-tech VR headset like IrisVision specially designed to leverage the leftover vision and improve the visual acuity is also recommended.

It must be upsetting to know that no cure has been discovered to treat juvenile macular degeneration. But IrisVision has got your back! 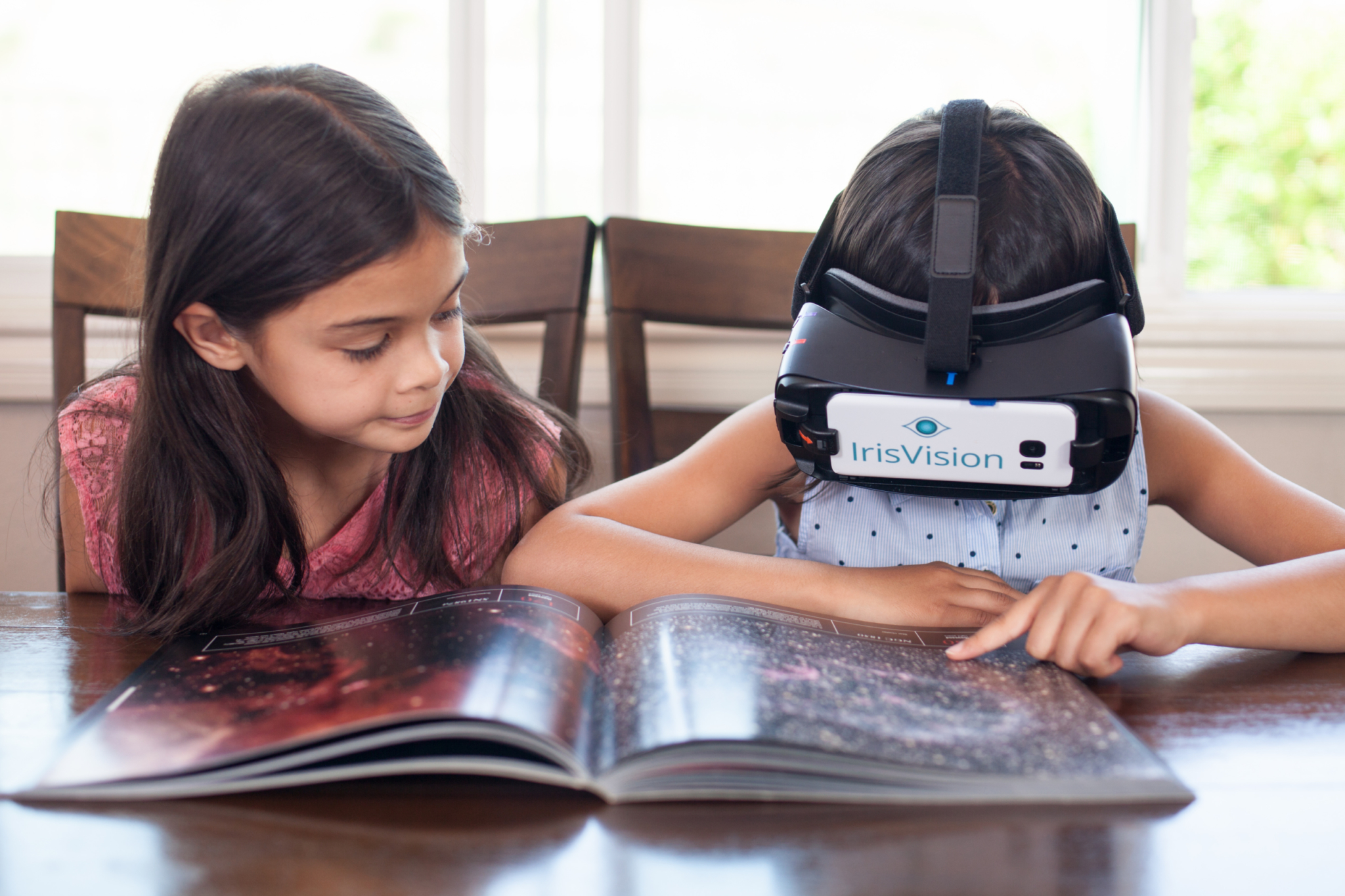 Lacking the minute details and a crystal clear image of the object in front of you also means that the person with juvenile macular degeneration cannot see the faces of the loved ones clearly. Bubble-view mode also enables a person to clearly look at and recognize faces.

In some cases, juvenile macular degeneration also causes peripheral vision loss. This inhibits a lot of activities that require a wide field of view. If you want to watch your favorite team play soccer, wear your IrisVision Live headgear and you are good to go! The 70 degrees field of view and up to 14X magnification will enable you to buck up your favorite team while you watch them play in broad daylight.

About the Author: Ashley Maddison