Our eyes are one of the most frequently used organs of our body, and as we age, their capacities begin to dim. It happens because the structures within the eye slowly begin to deteriorate with age.

One of the prime structures that play a vital role in vision development is the ‘retina’, which lines the back of the eye. It is responsible for converting visual stimuli into meaningful images. It is essential for central vision, color vision, and visual acuity – seeing the finer details of objects with vivid clarity.

Sometimes, as people approach age 55 and above, the cells of the retina begin breaking down – which leads to the onset of Age-related Macular Degeneration.

Age-related macular degeneration (AMD) is an eye condition that is most common among older adults, and it blurs your central vision.

As many as 11 million people in the United States have some form of age-related macular degeneration.


While AMD is highly prevalent among older people in the US, it accompanies several unpleasant implications.

According to a study by The Lancet, age-related macular degeneration is the 3rd leading cause of moderate to severe visual impairment, preceded by uncorrected refractive error and cataracts.

Before we dive into the details of the management of macular degeneration (AMD), let’s take a brief overview of its main types.

What Is Dry AMD?

Dry macular degeneration (also known as, non-neovascular macular degeneration) is a common eye condition in older adults worldwide. Its onset usually happens at age 55 or older. In Dry AMD, the light-sensitive cells of the ‘macula’ – a structure within the retina of the eye – become thinner with age.

It does not show early symptoms, so you may not notice any distinct changes in your vision until it advances. Dry AMD develops gradually and causes loss of central vision, that is, the things in the direct line of your sight may begin to appear hazy and blurred.

An estimated 85 to 90 percent of people who suffer from AMD are diagnosed with the dry form.

This eye condition progresses in 3 stages; early, intermediate, and late. At an early stage, vision appears normal, while people experience mild symptoms after some time, such as muddled images and difficulty seeing in dim lighting.

In the advanced stage of AMD, you may notice that straight lines begin to look crooked. Blind spots begin to obstruct your straight-ahead vision – a blind spot is a space within your visual field where the image gets cut off from view. You may first get foggy vision which leads to chunks of images that disappear altogether, making distinct blind spots in your central view.

During the course of its progression, Dry AMD may convert into Wet AMD at any point.

In most cases, AMD affects both eyes. If you have it in one eye, the healthy eye compensates for the loss of vision in the defective eye, and it may not be evident for a long time.

What Is Wet AMD?

Wet AMD (also known as Neovascular macular degeneration) always begins as the dry form of the disease, but it characterizes severe damage and worsens rapidly.

In Wet AMD, in addition to break down of cells in the ‘macula’, abnormal blood vessels start to develop beneath it. These blood vessels are delicate and often burst easily, leaking blood into the eye and causing irreversible damage to the macula.

Wet AMD is comparatively less prevalent than Dry AMD, but if it is not treated timely, the vision loss can quickly exceed to the point of causing legal blindness.

Approximately, 10% of people with AMD suffer from Wet AMD, but it is responsible for an alarming 90% of all AMD-caused legal blindness.


Does AMD Cause Blindness?

However, the damage to central vision is enough to cause significant difficulty in everyday activities. A person with AMD cannot recognize the faces of people, has trouble reading signs, and doing things such as going for a walk or driving.

On average, it takes about 10 years for a person to move from diagnosis to legal blindness. In some forms of AMD, vision deteriorates rapidly over a few weeks.

Age and Other Causes of AMD

This condition is most common among older white Americans. People who are over 75 years of age are 30% more likely to be affected by AMD.

While age remains the most dominant risk factor, habitual smoking, a history of hypertension and diabetes can add to the risk of getting AMD.

In the light of these statistics, eye doctors put great emphasis on getting an annual eye exam once you cross 40 years of age. It is critical in identifying eye conditions at their early stage, so they can be treated timely and vision loss could be prevented.

If you are diagnosed with AMD, the visual deficits that come along with it are irreversible. Many of these become a part of your life. Visual handicaps can pose added challenges to your daily life. You may need to depend on your caretakers for assistance in routine tasks, and resort to low vision aids to help you see better.


Some of the major ways in which AMD affects your vision are discussed below:

A healthy eye can see a wide island of the area within their visual field, with full clarity and detail. But as AMD progresses, the central visual area becomes smudged and distorted, with some spots cut off from sight altogether, known as ‘blind spots.’ 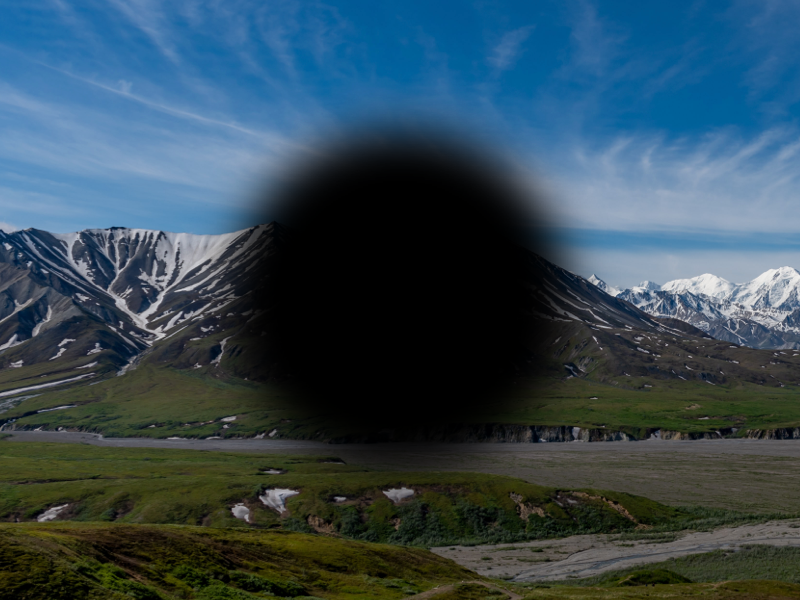 The peripheral vision is usually unaffected, but not being able to see straight ahead creates problems with most basic activities such as reading signs, driving, watching TV, and recognizing faces.

As the macula undergoes damage, the visual acuity gets compromised. The precision of an image, its texture, and color appears dim, and thus you may find it difficult to differentiate between 2 objects with similar hues of color.

By being unable to see visual details, you may miss the subtle changes in the environment and not be able to recognize the textural differences in pavements or stairs. Reduced color sensitivity can cause stairs to visually blend into one another, making them tricky to navigate. This is a serious drawback of reduced vision, which puts you at an increased risk of tripping and accidental falls. 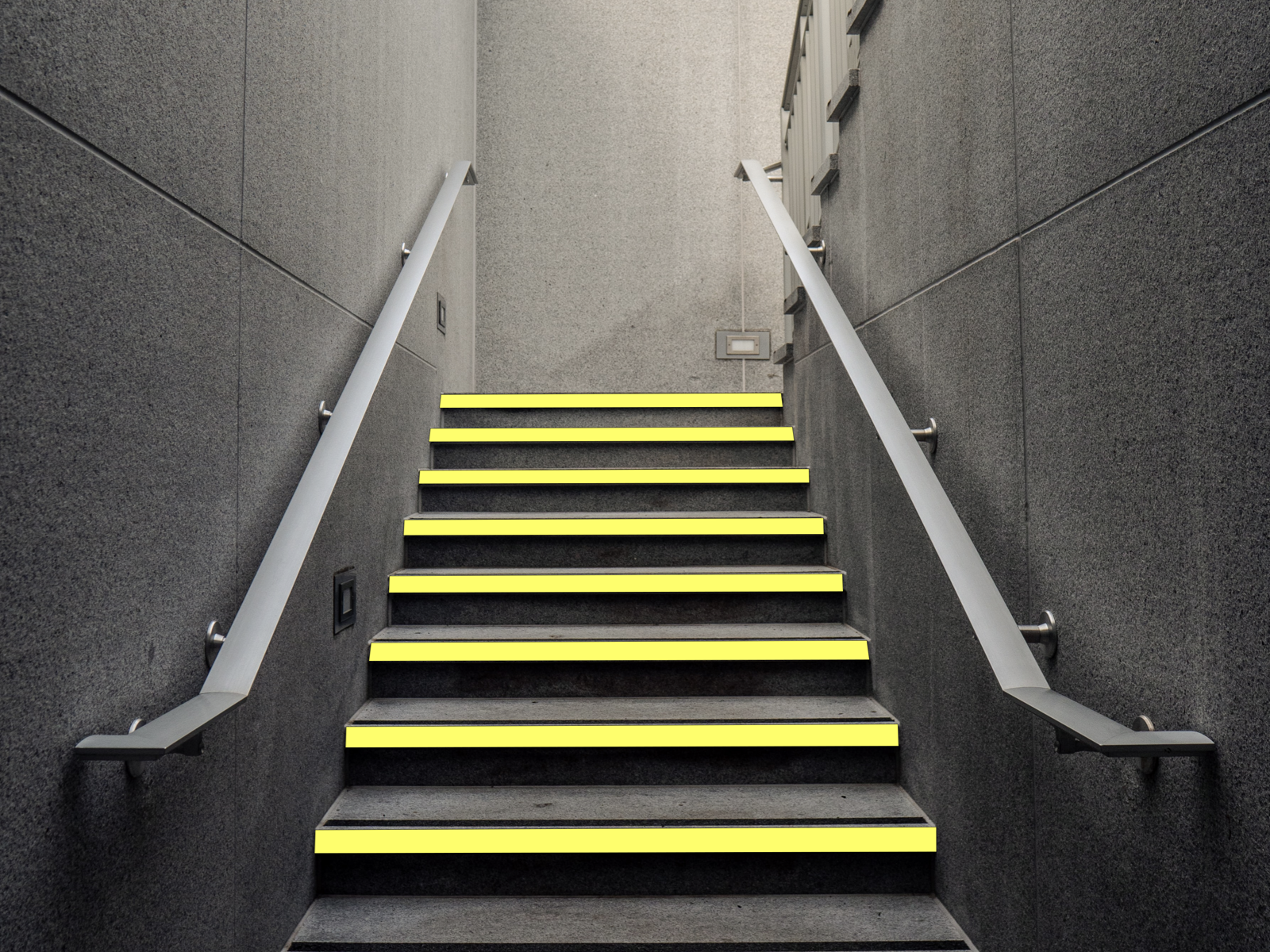 To counteract this problem, a simple solution would be to either paint such areas in bold colors or help set them apart visually by using neon-colored tape along each step’s edge.

AMD makes it difficult for your eyes to adjust to changes in light intensity. Moving from indoor to outside in the sun can create a glare outside of which everything will blackout for a few minutes until your eyes eventually adjust to it.

The use of sun shades can help counter this problem.


AMD inflicts damage to both rod and cone cells, leaving you with an inability to see in dim lighting. It creates a need for special task lighting for you to see better. The lights should be moderately bright, as too bright light may create blinding glare. 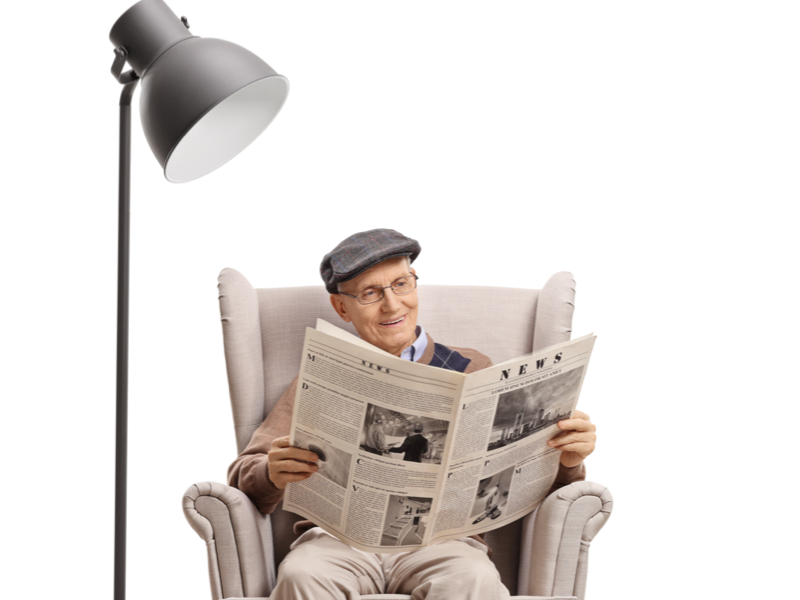 For low vision assistance, you would find the light of halogen bulbs to be most suitable, as they are brighter than regular incandescent or LED light bulbs and are better suited for task lighting. Adding halogen bulbs to working spaces can improve vision quite a lot. Consider adding them to kitchen counters, inside cabinets/drawers, reading area, bedroom nightstand, staircase and hallways, the shower, and washrooms.


A person’s inability to correctly estimate the distance in front of them can make walking harder and unsafe by increasing the likelihood of missteps and falls.


Many people prefer using a walking cane or wearing a wireless low vision aid that helps them navigate through the way without the hazard of falling over.


A study published by the National Center for Biotechnology showed that AMD is a major risk factor for causing depression in older adults, and people whose independence gets compromised due to low vision are most vulnerable to it.

AMD is accompanied by reduced quality of life, lack of mobility and independence, thus leading to feelings of social isolation and depression. However, the active use of technological low vision aids and other assistive devices can help you manage low vision more efficiently and carry on with your life uninterrupted.

With growing advances in medical technology, many researchers have attempted to create visual aids that help people with low vision see better. IrisVision is one such low vision device that is developed by tech experts, in collaboration with Samsung. It is powered by specialized software that caters to the low vision problems resulting from various eye diseases. 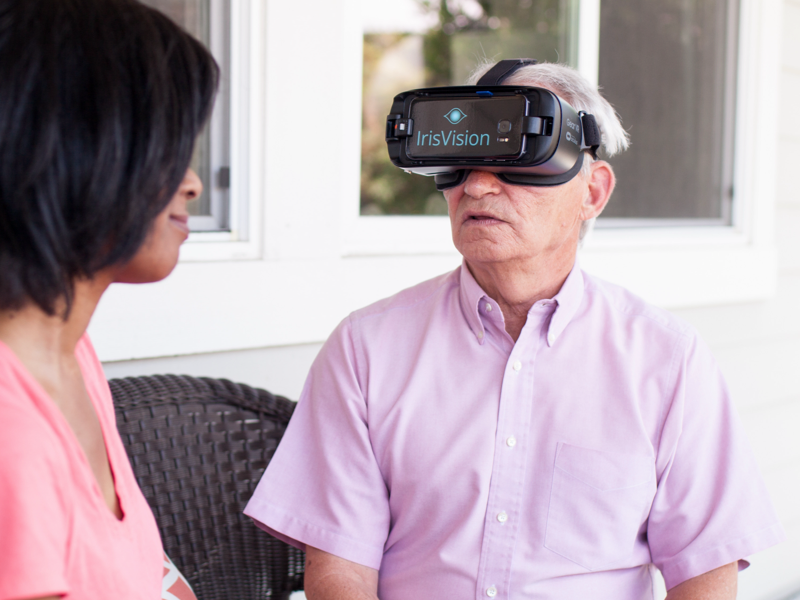 IrisVision low vision glasses are designed to improve vision for people with macular degeneration, retinitis pigmentosa, and optic atrophy among other eye conditions. Not only does it bring better sight, but also has additional features such as a picture gallery and television mode, to help you stay well connected to the world around you.