Legally Blind – What’s to Know About?

Legally Blind – What’s to Know About?

“Legally blind” may not be a totally alien term to many of you, but some of you must have wondered quite a few times about what is legally blind really, who and what is considered legally blind and how it differs from complete blindness? Does it have something to do with defying the law?

According to a report shared by the NIH,

The number of legally blind people (20/200 vision or worse) in the United States of America was well over 1 million in 2015.

Fact of the matter is that the term can cause some confusion in the minds of those with no idea of what it’s all about, and this write-up is aimed at helping you get rid of such confusions. So, let’s get back to your query that brought you here in the first place, and a few others:

What is Legally Blind and Who Can File for It?

Why not have a look at the legally blind definition followed administratively all across the U.S? Legal blindness has been described by the U.S. Social Security Administration (SSA) at two different levels, i.e. based on receded visual acuity and limitation of the field of view (FOV).

If you qualify the criteria mentioned above, you stand eligible to file for the visual disability benefits, but it doesn’t guarantee that you’ll get the claim certainly, as various other factors also come into play; for instance, the ones described in here.

Now, let’s get back to what’s meant by going legally blind due to “reduced central visual acuity of 20/200 or lower”? In majority of the cases, a measurement system referred as the “Snellen Visual Acuity” is followed all through the USA in referring to the clarity of eyesight.

This system involves your identification of letters on an eye chart getting smaller and smaller, whereby the corresponding results are reflected as a fraction standardized for viewing something at a distance of 20 feet precisely.

This means that your central vision, the part of your eyesight needed to see and identify objects when you’re looking directly at them, has been deteriorated significantly – 10 times in this case – compared to that of a person with normal vision.

For you to be considered legally blind, you must have a visual acuity of 20/200 or worse in your better seeing eye with corrective lenses on it.

So, your inability in seeing properly without glasses while you get up in the morning won’t have to do much with qualifying you as a legally blind person.

Similarly, if your vision can get better than 20/200 with the help of glasses or contacts, you won’t be considered legally blind, irrespective of how much nearsightedness (myopia), farsightedness (hyperopia) or squint (astigmatism) you have.

Also, if your vision remains worse than 20/200 despite best correction in one eye, but your other eye is able to see better than 20/200 with the help of a corrective lens, you will not be considered as legally blind. 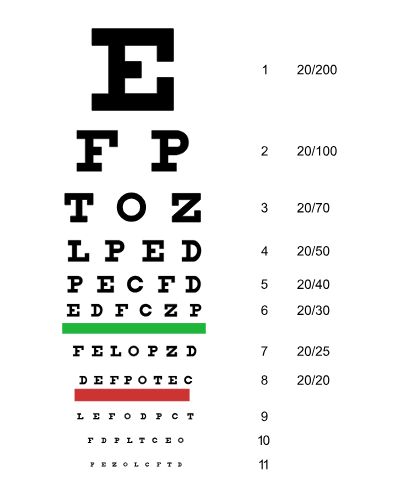 Some people are able to see considerably small letters on an eye chart, but fail to see a person standing next to them, all because of poor peripheral vision.

The significance of a broader field of vision becomes apparent especially when you consider how much of it is needed in performing various day-to-activities, such as driving a car or running through a busy street.

Testing your eyesight for visual field is totally different from testing for central visual acuity. Irrespective of the type of the device a doctor might use to test your field of vision, the objective remains to verify if you have a normal visual field without any unusual narrowing of peripheral vision or the presence of any undesirable blind spots.

The maximum lateral field of view in people with normal vision creates an angle of almost 180 degrees, which means they will be able to view objects located directly to their right or left simultaneously. However, it’s not the same case with the normal vertical field of view, which creates an angle going no farther than 135 degrees, i.e. you’re not able to view the objects directly below your feet or above your head at the same time.

If your peripheral vision is observed to be restricted drastically to 20 degrees only (creating a very limited visual field often referred as ‘tunnel vision’), you’ll be considered legally blind despite being able to see the 20/20 line on an eye chart.

Though there can be a myriad reasons for a person to be born with a type of visual disability leading to legal blindness through their lifetime, majority of people go legally blind because of the following four main reasons:

Irrespective of the cause of legal blindness, you’re eligible for certain services, privileges and special assistance when you’re legally blind. Let’s have a look at some resources that can help legally blind live a better life.